by The Museum / Wednesday, 01 April 2009 / Published in A Day at the National Museum

The community mural project was one of the most important hurricane relief/recovery projects completed by the museum in 2009. Working with the BiuldABridge organization and their program Artist on Call, the museum brought a visiting mural artist to the TCI for eight weeks in February/March. Three exterior art murals were completed as well as a number of other small programs and seminars.

The art programs directly involved over 100 students, artists, community members, and local leadership groups. It indirectly influenced the entire community on a daily basis as they witnessed the positive changes that can happen after a disaster.

The first mural was at Ona Glinton Primary School of local trees and flowers, which highlighted the natural landscape of Grand Turk. Students of the fifth grade class were directly involved with the entire process. They assisted as a part of the planning, designing and tracing the images, keeping a journal, and finally painting the four panels.The children completed the mural by staying after school for two weeks. Parent-signed permission slips were required and the project received 100% parent support and involvement in a project at Ona Glinton.

The visiting artist led the students in multiple learning sessions where painting techniques were taught as well as color identification and mixing. This was applied to the painting of the mural and the students soon became very focused on completing their portion of the project. They often complained when supplies were packed up for the day.

It was also extremely calming and therapeutic for the students involved. The mural became an outlet for the children to express their feelings about what had happened during Hurricane Ike. Some talked about their persisting fear of another storm coming in the night while others spoke of their anger over losing both possessions as well as a sense of security. In this way, the mural not only made a building beautiful but it also created a place for children to feel safe and an atmosphere appreciative of their circumstance. 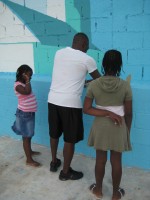 The second exterior mural was painted on a damaged wall downtown behind the Grand Turk courthouse. At 57 feet by 17 feet, this was the largest public mural the volunteer artist had ever completed.Iconic images were selected to represent Grand Turk both past and present. Community involvement was crucial to the completion of this mural. The artist elicited help from local community artists to design and project the image. Kiwanis Club members and their families donated time and supplies to clean up the wall and surrounding area and spent an entire day prepping the wall for painting.

Students from the HJ Robinson High School art class came after school to help paint. Locals from the community who saw the work would stop, ask what was going on and would help when offered a brush and a chance to paint, many of them returning the next day with children and family members, claiming the mural to be a great learning experience for children.

This mural was painted by many volunteers: men, women, and children from ages five to sixty-seven, all of whom can say they have made a lasting impact on the community.

Because of the success of the first two murals, another opportunity was offered on Providenciales for the artist to facilitate a mural program at the Gartland Youth Center. Five local art students were involved in the painting of this “Mural of Hope. At the youth center the volunteer artist taught two more classes on painting and color theory and gave individual portfolio consultations and school advice to interested students.

The grant funded the framing and installation of a children’s art exhibit on Provo. This exhibit now hangs at the Salt Mills Cafe and has continued to receive attention.