The first time I heard about Ft. George was almost exactly 18 years ago in October 1981. There was a local uproar about how a fly-by-night treasure hunting outfit called (believe it or not!) “Nomad Treasure Seekers” suddenly appeared off Ft. George Cay and started trying to raise some cannons lying in shallow water just offshore. Fortunately, Nomad’s attempted theft was thwarted by Gary Adkison, then divemaster at the Pine Cay Marina, who confronted them on site and threatened to call the Police. Gary’s saber rattling in combination with the fact that Nomad had neither the equipment nor competence to raise large cannons from chest-deep water encouraged them to move on. But as an archaeologist, I was intrigued: A “fort” in the Turks and Caicos? What did it date to? Who built it? Why was it there? Large cannons in chest deep water? How did that happen? Were they from a shipwreck or what? 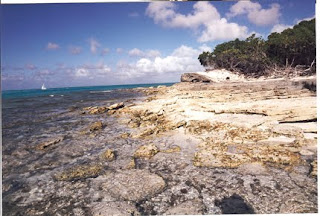 Fort George was but one of the many historical mysteries of the Turks and Caicos Islands that I was curious about, but for the next 9 years I was up to my neck in completing the excavation, conservation, and analysis of the Molasses Reef Wreck, now on exhibit in the Turks and Caicos National Museum. Finally, in 1998 my Canadian colleague Jonathan Moore and I were invited to visit Ft. George Cay with Jack McWilliams who, with other Pine Cay residents, had a long-standing interest in the site. Jon and I were fascinated by the cannons offshore, strange holes drilled into the ironshore, and carefully cut and laid stone foundations, now tumbling down from a low prominence as the sea ate away at its base. The dense bush dissuaded us from venturing inland, so we could only wonder what lay in the interior.

The only historical information readily available about Ft. George Cay was a few short paragraphs in “Turks Islands Landfall,” a collection of brief sketches compiled by H.E. Sadler, an amateur but avid historian. He stated that Ft. George was built in 1798 by a British Army contingent in order to protect the Loyalist planters who had moved from the newly-formed United States of America to the Caicos Islands following the Revolution. Apparently, the British Army abandoned the fort a year or two later, after suffering severe losses to disease. There is no mention of any actual combat at the fort.

Now, finally, we have an opportunity to conduct the first archaeological exploration of Ft. George Cay as well as nearby Grouper Cay which is said to have similar ruins on it and may be somehow connected to the fort. Over the next two weeks our team of nine professional archaeologists and volunteers will face a challenging working environment and a tight schedule in the course of trying to answer some of the most basic questions about Ft. George: How much of it is left and how much has already been lost to erosion? Are the ruins on Grouper Cay part of the fort? Can the fort be reconstructed? How much of it is now under water?

We will focus on finding and surveying the ruins and archaeological features, rather than on excavation, which is extremely time-consuming. We will start by mapping the cannons offshore of Ft. George Cay, then connecting them with the features on shore, then moving inland to the partially-eroded foundations and onward, deeper into the island’s interior.

Over the next two weeks different members of the team will contribute their perspectives and observations to this blog, the goal of which is to share with you, the reader, events as they happen, and make you a part of the exploration and discovery experience.