By Randy Davis, Ships of Discovery

Many people ask me what archeologists do. “Are you a treasure hunter?” Yes I am but not like most people think. My treasure and what gives the value to any object, be it a car or a piece of furniture, is the story.

Think of it like this. The treasure hunter goes down to the beach where he heard there were some golf clubs spotted. He quickly scours the area and finds 3 — a 9 iron, a 6 iron, and a 3 iron from 1954. He calls a club dealer and finds out these are worth $29 a piece—great. The archeologist, however, goes back to the site and carefully excavates the area and eventually finds a bag with several other clubs in it. He notices that the monogram on the bag is JFK. In this example, now we have a story; the real treasure and what gives value to the objects. 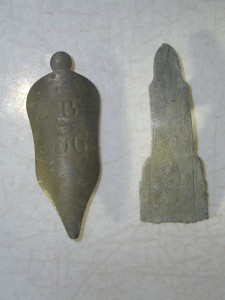 Today in the overgrowth of the original fort we found 2 pieces of what we thought were musket furniture (see image at left) —the parts of metal on the gun (see image below). At first we were not sure about them, but it had markings that if deciphered could help tell the story of Fort St. George. Now the detective work begins. It is a 200 year old CSI case.

As soon as we got back to our quarters I reexamined the piece to see if there were any clues we overlooked in the field. Then I began a search that 30 years ago when I started in archeology could have taken 6 months. By the time you called a few people and found out who to send a picture to, developed your pictures, sent them, and they responded with a call or letter that they had no idea but they sent them to another museum curator and he would call me, it could easily be months. Today, however, with the internet, databases, E-mail, and cell phones, this process is shortened so that many of these searches can begin in the field.

The internet search was of no help. There was nothing under musket images or general information on the web. Thankfully, an article we have from the Parks Canada was a winner. I was able to pull up weapons from a shipwreck done several decades ago that had the exact same object—a wrist escutcheon from a musket. Great! Part of the story was answered. But what did those letters and numbers mean that were on the piece? In the Canadian report it was thought that these symbols were to identify where the musket was stored. We hope there is more to it than that. An E-mail was sent to an associate that is an expert on small arms. We will continue to investigate the site and other objects until we can tell the story of Fort St. George.