A Guest Blog
By Dr. Charlene Kozy
Authority on the Loyalist Planters in the Turks & Caicos Islands 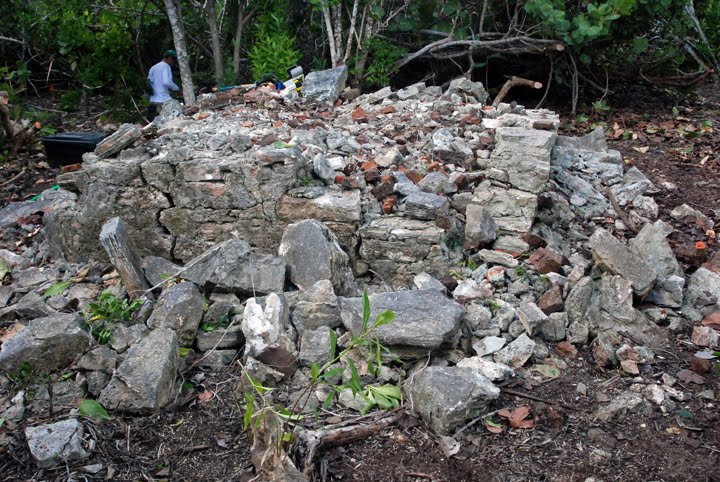 A short while ago I was asked if I knew who built Fort St. George. Without hesitation, I answered, “Thomas Brown, one of the American Loyalists that settled on the Caicos Islands.” My answer was based on original sources found in the Colonial Office in London. In one letter, written to the Earl of Camden, Brown told how he “met the threat of a French invasion in an area totally out of protection of government and is daily exposed to capture or destruction.” He states that he constructed two forts at his own expense and provided the same with 14 guns from the last war and built a furnace for the “heating of shot” (remains of furnace at left).

He wrote to the Under Secretary of State encouraging the British to recognize Fort St. George as an important port for trading in the Caribbean and asked that it be fortified. He retells about the construction of forts and the provisions provided by the inhabitants of the Island. (CO260/19) A third letter written to John Sullivan, Esq. describes Grand Caicos as:

“being surrounded…of rocks and shoals is, as far as my knowledge extends…fortified by nature than any island in the west. The quarter of the island most vulnerable is at St. George”s…where inhabititants for the protection of the harbor…at their own expense, constructed a stockade, a…platform for 16 guns, furnace for heating shot…barracks for 40 men. The Garrison, principally consisted of Blacks, the property furnished by the inhabitants, who did duty at Ft. George until relieved by a detachment of His Majesty’s 63 Regt…Artillery sent by Lord Balcarras from Jamaica …of Saint Domingo by the British Forces” (CO260/18).

The British began issuing land grants to Loyalists between 1789-1790. (Bahama Registry) but cotton cultivation had not gained the importance that the sugar plantations held in the West Indies . When the British and French began a war in the West Indies the Caicos was dangerously exposed and this stimulated the new settlers to try to protect their property.

Thomas Brown came to America at age 24. Seeds of the revolution had been sown and his verbal support of the King led to harsh treatment by the Sons of Liberty. He became one of the ablest fighters for the King and rose to the rank of Lieutenant Colonel in the King’s Rangers Regiment. Many of the men who fought with him in America settled with him on the Caicos. He is well known in American history for his ability and resilience. He fought from forts and would understand their construction and value.

Dates would suggest that Brown and/or his followers built the fort(s) after 1793. The British sent a regiment sometime after October, 1798 led by Neil Campbell to man the fort perhaps at Brown’s request. Campbell returned to England in 1800. (The Bahama Almanac and Register for the Year 1801. Memoir of Sir Neil Campbell.)