Early images of one of Grand Turk’s first formal medical facilities have been given a new lease of life thanks to an extremely patient design student. Shalomar Forbes, an intern working at the National Museum, took it upon herself to revamp 14 old black and white photos. 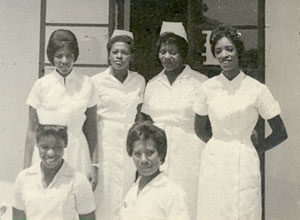 And now her relentless hard work will be put to good use as the pictures will be pumped up and put on display at the new Cockburn Town Medical Centre.
Brian Hogan, NHIB’s chief executive officer, said it was an appropriate way to pay tribute to medical pioneers that laid the foundation of the modern medical system. “NHIB is proud to work with the excellent group of medical professionals in the Ministry of Health, private practice and InterHealth Canada.

“We felt that incorporating a bit of TCI’s healthcare history was the best way to demonstrate our appreciation to healthcare professionals and remind people how TCI’s healthcare system has evolved.” Shalomar, who will be completing a degree in graphic design this year at Barry University in Miami, spent hours restoring 14 prints of the Grand Turk medical facility from the early 1960s. She scanned the historic images, which are part of the permanent collection at the National Museum, into her computer and cleaned them up using specialist software

Shalomar said: “The original pictures were so small, about two inches square, and enlarging them proved very difficult. They are over 50-years-old and every small scratch or spot became huge once we scanned them in.”

However her hard work was not in vain and the photos were enlarged more than five times their original size. The images show the Grand Turk hospital, nurse Bailey, and images of the probationary nurses’ class which were all photographed by Allan Bishop in the early 1960s.

National Museum director Neal Hitch said: “Medical facilities were at a minimum in the Turks and Caicos during 1960s with a 16 bed hospital on Grand Turk, a small operating theatre, an x-ray machine with limited capacity and a rudimentary laboratory. “Medical staff included two medical officers, one on Grand Turk and one in South Caicos. “The staff at the Grand Turk hospital consisted of a matron, four staff nurses, three probationary nurses, and one nurse working as a midwife.”

He went on to say that during 1960 eight women from the Caicos Islands were recruited and trained in Grand Turk to be midwives.

They were considered settlement nurses and were provided with a nurse’s bag, dressing, scissors, and a stretcher on which to evacuate very ill patients.
Prior to this, many local settlements were without any trained medical help.

NHIB’s Mr Hogan said they showed current staff members the historic prints before they were taken for framing, and one recognised a family member.
“We hope that persons visiting our offices will take time out to look at the amazing prints; who knows, you might see yourself, a family member or a friend.”

Also, anyone who owns black and white prints showcasing the health sector, hospitality or utility sector is encouraged to contact the museum.

Surprise visit to the Museum

Archaeologists Return after more than 30 Years