by The Museum / Thursday, 06 January 2011 / Published in A Day at the National Museum

Mary, Mary, quite contrary. How does your garden grow? This old English children’s rhyme had more to do with politics than gardening—but the Museum’s Arboretum/Botanical Garden is all about the garden!

Through the years the Turks and Caicos National Arboretum has metamorphosed into many things. After its establishment, native trees planted in the garden grew unexpectedly well into a cool, shady forest of green with winding paths and fragrant blossoms, where Museum events were held and people walked.  After Hurricane Ike in 2008, when it was nearly destroyed, the Arboretum was left to fend for itself and further deteriorated. Unfortunately, it had much help from invasive plants as well as non-caring folks who used it as a dumping ground for trash and stolen items. 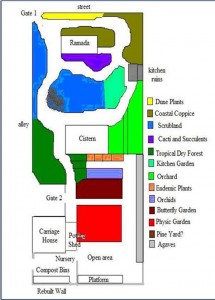 The botanical and cultural garden will be divided into zones reflecting the landscape diversity found in the TCI. It will also eventually include a butterfly garden and local plants used for medicinal purposes.

Flash forward to August 2010, when a new team of Museum staff saw the endless possibilities for the garden. A proposal was made, and with the help of a local botanist, a scheme was set in motion. With seed money from a Wilmington Hurricane Relief Grant and hopefully other funding, the National Arboretum is changing into the Turks and Caicos Botanical and Cultural Garden.  Oh, and did I mention that all of this work was done with volunteers? From the proposal, to the layout, to the removal of years of garbage, to the lovely benches that were donated by Caribbean Tours International, (see Gazebo Renovation, October 22, 2010), the work has been initiated through the in-kind donations of individuals and companies.

When we started the clean up last Fall, we stumbled across a cash register that had been dumped there after a recent robbery of a famous fried chicken establishment. The Police were called, and after getting the facts, the policewoman started speaking about how lovely the garden used to be and how peaceful it was. We explained that we were trying to turn it around, and she was extremely pleased.

This seems to be the consensus of the island.  The Garden’s focus will be expanded to include many different native plants, including those with uses in the local “bush medicine” pharmacopeia. Well-grown mature trees will be pruned properly and labeled with identification markers, and facilities for caring for the garden will be upgraded. Strategic use of native plants will showcase their value in landscaping to encourage homeowners and businesses to choose landscaping schemes inclusive of TCI’s own botanical heritage.

We hope the Garden will again be a peaceful place for both residents and day visitors to observe and learn about nature, be it the resident yellow crowned night-herons, the numerous butterflies, or whale watching in February. The garden is coming back to life and we hope to improve it into a true national treasure. We are still in the first stages of the transformation. Keep checking the blog for regular updates and when you can, come by and see it for yourself.