The Museum receives many emails on our info@tcmuseum.org, but none as interesting as the one we received in late January, 2011, from a Mr. Lawrence Jack Little. Here is his email:

I am Lawrence Jack Little.  I worked at the tracking station in 1959/60 and I visited Turk in 2004 or there about.  I talked with a Ms Cheryll Paige and promised her I would send photo I had taken while working at the tracking station.  However, I have been very remiss in my promise.  I did find some 8mm movies I had taken of various events and while diving off the end of the Island.  I do wonder if you would be interested having these movies.  If so, I will be glad to ship them to you to include in the museum in anyway./p>

The wife and I had a wonderful stay at the Osprey Hotel and even encountered some old friends there at the Osprey.  It was wonderful to visit back to the island to see how you have expanded the water supply and the electrical service since I had worked there.  Also, I recalled visiting the dentist while working there and his wind powered drill he used to fill a tooth for me.

I answered his email, and told Mr. Little that we would love to have his films. He converted them onto a DVD and sent it to my USA address while I was visiting my son in March. I brought the DVD back and watched it with Melanie. WOW was I ever surprised. For a “home movie” from 1959-1960 it is wonderful. Numerous shots of the island, the Bases, and footage of Front Street with many buildings that are no longer standing. There were also some underwater clips, something we only thought would be done via Hollywood and “Sea Hunt”. (Only real Baby Boomers would remember that one!!).

Since we had “Movie Night” at the Museum scheduled for Tuesday, March 29, we decided it would be great to have this footage precede our feature film. When I emailed Mr. Little and told him, we both agreed that some things never change some 50 years later…entertainment on Grand Turk is self made!

When our movie-goers were assembled, I read the email that Mr. Little had sent, and told everyone they were in for a real treat. Once the movie started, everyone was shouting out “oh where is that” or “oh my how things have changed”. Mr. and Mrs. Dempsey were the best at recognizing some of the places in the film. We are making them a copy so they can sit and go through it at their leisure. This way the Museum has a record of what is on the film.

Although Mr. Little was not in attendance for the “premier” of his film, he did get a standing ovation. 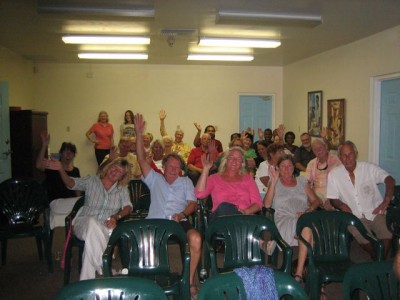 Most folks thought his movie was much better than our feature presentation!

So, dig through those cupboards and storage units and send the Museum your photos or memories.

Here is everyone waving to Mr. Little.