15 July 2011 – Bird week was a great success for the Turks and Caicos National Museum and their partner, the UK Overseas Territories Conservation Forum (UKOTCF). After almost nine years in the planning stages, these Trails have become a reality due to a grant from the Carnival/TCInvest/TCIGovernment Infrastructure Fund. 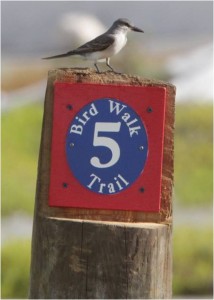 This little guy could hardly wait for the tour!

There is now a “Walking Bird” and a “Driving Bird” tour on Grand Turk with clearly marked trail signs, placed on downed telephone poles which were donated and installed by Turks and Caicos Utilities.

This week long event, commencing on July 11, had an “early bird” walk with students and teachers from HJ Robinson High School and Dr. Mike Pienkowski and Ann Pienkowski showed the students the wonderful birds found along the Salina’s.  After the bird walk the students went to through the Botanical Garden, next to the Museum. The DECR loaned five pairs of binoculars for this event.

The Bird Drive Tour on Thursday evening, July 14, was a sold-out event. Twenty-two adults and two children rode on a bus donated by Caribbean Tours International, who also supplied 22 pairs of binoculars. What an event, even the birds cooperated! With Dr. Mike Pienkowski leading the group, even the novice birder was fascinated by the amount of different birds seen so very close. 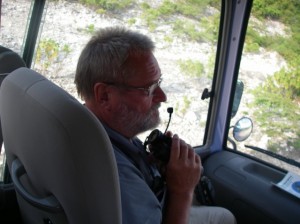 Flamingo’s took off from Town Salina just as the bus was approaching, giving the group a firsthand look at these beautiful birds in flight. An Osprey sat on the remnants of a windmill, posing for the group to take photos. We saw Black Necked Stilt five day old chicks wading in the Great Salina while their Mother watched carefully. There were ducks aplenty at South Wells, and Egrets, Pelicans and Herons at North Creek. One very brave Cattle Egret even walked in front of the bus over 100 yards as if to say “follow me for the best birding ever”. 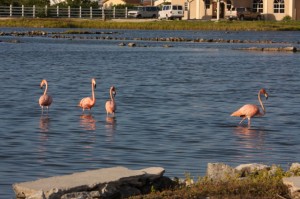 Flamingos in the salina -- right on que.

After this wonderful Bird Tour the group went to Jack’s Shack to have a tasty meal. Jack donated some of the proceeds of the evening back to the Museum.

Friday morning, July 15, we had the Official Opening of the Bird Trails. Ms. Lillian Swann Misick cut the ribbon with many guests watching. The guests then proceeded into the Osprey Beach Hotel where Dr. Mike had a short presentation about the importance of these Bird Trails. All participants received a lovely Osprey Commemorative Lapel Pin. 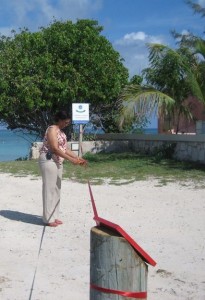 The Turks and Caicos National Museum would like to thank the following supporters that made these events so successful.

For more information about the tours and to purchase copies of the guides,  Contact us at the Museum.