By Donald H. Keith
Chairman of the Board of Trustees 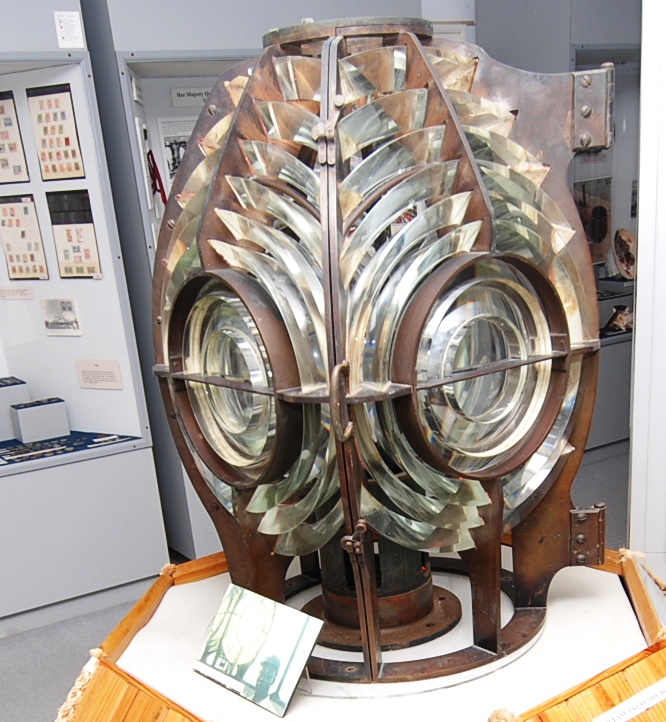 The original Fresnel lens from the Grand Turk lighthouse.

We’re working on a new lighthouse exhibit for the Guinep House. The Fresnel lens has been on exhibit on the second floor for many years, but now we want to combine it with its original “clockwork mechanism.”

The problem is, although we have the lens and the clockwork, we do not have the column that used to support the lens, the driven gear at the top of the column that turned the lens, or the pool of mercury that the lens floated on to reduce friction. All of those things are still at the top of Grand Turk’s lighthouse that, for safety reasons, is not open to the public. Museum Director Pat Saxton made a few phone calls and got permission for Sherlin Williams and I to enter the lighthouse to photograph and measure the column so we could reproduce it authentically.

Sherlin and I arrived at the lighthouse just before 8 AM, along with the wind, rain, and Keeper of the Key, Jerome Miller.  Within 5 minutes we were through the massive lighthouse door, lugging our cameras and recording equipment inside. 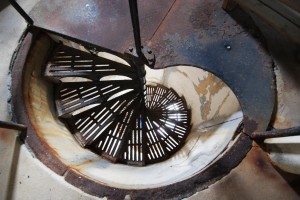 Spiral staircase with 64 steps leading to the top of the lighthouse.

It being a dark and stormy morning courtesy of Tropical Storm Issac, the sounds inside the 160 year old cast-iron structure were straight out of a Hollywood thriller: wind moaning ominously, rain pelting the windward side hissing and falling silent like the Big Bad Wolf trying to blow the house down.  Surprisingly, it wasn’t dark inside.

Strategically-placed windows admitted enough sunlight to illuminate the 64 steps leading from the entry to four different levels as the distance between the walls narrowed and finally to our goal, the actual glassed-in light room at the top. 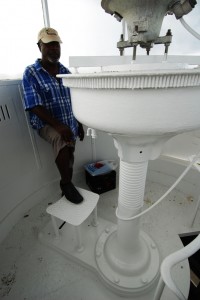 After admiring the best view on Grand Turk for a few minutes Sherlin and I set to work.  One of the bits of information we needed was the exact number of teeth on the gear at the top of the column. I measured the elevations and diameters of the various elements of the column while Sherlin tackled the tooth count.  Eventually we had to count the teeth 6 times to get a reproducible number: 232!

With this and other critical dimensions we are now ready to contact our friends in the World Lighthouse Society for expertise on how to reproduce the column, gear, and some kind of bearing arrangement to replace the huge pool of mercury originally used to float the Fresnel lens.

This is turning out to be a much bigger project than we anticipated, but we believe the end result will be one of the Museum’s most attractive exhibits.

And the Garden Grows