The first week of October was a busy one at the museum.  On October 1st the director and assistant director of the Cultural Arts Center of Saint Louis in Missouri came to Grand Turk for the day. 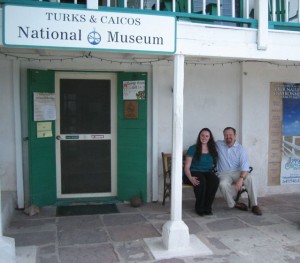 Linsey Daman and David Goldfarb sitting on the memorial bench they purchased for the Cultural Arts Center of Saint Louis, LLC in Missouri.

Linsey Daman contacted us before their planned vacation in the Turks & Caicos about purchasing a memorial bench to support the museum.  Of course that would require a visit to the museum and the bench. They also brought small plush toys that they gave out to some happy 2 year olds at two of our nursery schools.  If you go to grandturkevents.com you will see some photos of that event.

On October 4th, Robert M. Hutchings visited the museum while in port from the Carnival Liberty Cruise Ship.  The Hutchings name should be familiar to you if you read the Astrolabe article in the Spring Issue of the Times of the Islands.  Robert is the cousin of Hugh Hutchings who donated their grandfather’s clock to the museum.  The family also donated the TCI flag depicting the island salt “igloos”. 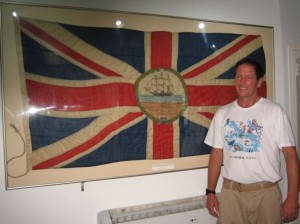 Robert M. Hutchings posing in front of the TCI flag belonging to his grandfather and donated to the museum by the family.

Grandfather H.H. Hutchings held many different posts in the Caribbean.  He started in Grand Turk by virtue of his birth here and retired in the 1930’s after serving as Commissioner of Grand Turk.  His grandson Robert continued the family tradition of a “rolling stone” starting life in Columbia and now residing in Switzerland.  We all enjoyed Robert’s visit with his wife and a friend from Columbia.  We sent him off with a several copies of the Times of the Islands.  We also showed him a picture of the White House on Salt Cay as another cousin, Georgia Dunn, helps maintain that family property.

The gift shop staff is ordering up for the holidays.  We will have new mugs, wine glasses, tote bags, note cards featuring the flower watercolors of Hugh Hutchings’ mother and some new postcards.  Hugh’s mother created beautiful and incredibly detailed watercolors of plants found here on Grand Turk.  The museum can never thank the Hutchings family enough for their generous and varied donations to our collections.

Congratulations to Editor Kathy Borsuk, her staff and Times Publications on the 100th issue Fall 2012.  If my math serves me the quarterly are 25 years old.  We are reminded every 3 months how important this magazine is to maintaining our sense of community and our knowledge of the history and culture of our small island nation.  Thank you!