29 September 2009 – In August, the Turks and Caicos National Museum made a smashing success of the 2009 Summer Children’s Club program on Grand Turk. The club met every Tuesday afternoon for a day of cultural activities and field trips. The program was as much fun for the adults who attend as it was for the children.

Our first activity was a tour of historic Waterloo, the Governor’s residence. Guided by Mrs. Rosemary Wetherell, the club learned about the history of the residence and what it is like to live in the house. Dr. Neal Hitch, the director of the National Museum pointed similarities to Bermudian and colonial American architecture. The club participants also learned how to “read” a cannon with Mr. Sherlin Williams, who talked about the ceremonial filed piece on the porch of the house.

When the tour was over, the club continued on to Oasis Divers for a swim lesson and a snorkeling trip the BioRock, an artificial reef constructed by the DECR. The importance of protecting and preserving the reefs and coral of the TCI was discussed by Jodi Johnson. The short boat trip was followed by a beach BBQ. 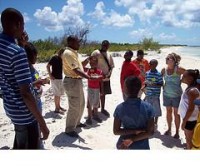 The following Tuesday was a very exciting club trip on board the GT Land Adventures nature tour bus. One of the best tour guides on the island, Rudolth Francis, entertained the club by touring around Grand Turk seeing sites typically visited by cruise ship passengers.

“We learned about the island wildlife, had a chance to see some flamingoes that were located on the West Road ponds, and then we were lucky enough to save a small potcake that had fallen into a well at the historic North Wells site,” commented Aliatte Michel, the program coordinator. “Our one hour tour quickly turned into a three hours that was one of the most fun activities we have ever done as a club.”

Our last Tuesday was spent at North Creek kayaking around the different types of mangroves with the staff of Oasis Divers. It is said that the mangroves in the Turks and Caicos Islands are the most important habitat because it is the fish nursery that supplies our reefs. The club learned to identify the different types of mangrove trees and viewed the various types of sea creatures that live around the mangroves.

On the fourth and final excursion of the August program, the club spent the day aboard the Carnival Liberty cruise ship while it was in port at the Grand Turk Cruise Center.Both children and adults were captivated by a full tour of the ship. This was followed by a bountiful lunch on the Lido deck where we behaved as polite guests, but ate more than usual. After lunch the club had access to the on-board pools and water slide, which provided a great way to work off the bowls and bowls of ice cream. 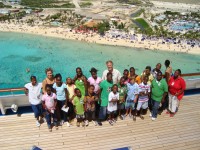 The day aboard the cruise ship was one of the best Children’s Club events ever, especially with the help of the Oasis Divers and GT Land Tours staff. The Museum would also like to say a big thank you to the now past director of the cruise center, Mike Reimers, who was always a friend to the museum, and who went out of his way during his last week in the TCI to see that we had not just a good time, but a BEST time.

Dr. Hitch sums up the program like this: “this summer we had the best Children’s Club ever and this is owed to the remarkable tour businesses on Grand Turk, our fun filled staff, and mostly the children themselves.”

Charming Charms and other Goodies