Some claim that Christopher Columbus's October 1492 landfall was Grand Turk. Other islands in the Bahamas also make this claim. Scholars may never settle this controversy about exactly which stretch of white sand first received the Admiral's foot.

There is no controversy, however, about where the first American to orbit the earth initially set foot upon his return to the planet. It was Grand Turk.

During the late 1950s and throughout the 1960s and 1970s the USA and USSR were locked in a race to see who would be the first to break the many milestones that space offered. The Turks and Caicos Islands were to play a minor part in this race.

On 20th February, 1962 Grand Turk hit the international news with the arrival of Lieutenant Colonel John Glenn. Glenn had earlier been launched into space from Cape Canaveral and became the first American to orbit the earth, doing so three times in just under 5 hours. His craft, Friendship 7, was part of the Mercury programme and after re-entry it splashed down in the Atlantic close to the Turks and Caicos Islands. Glenn was picked up by the USS Noa and transferred to the USS Randolph from where he was taken to Grand Turk. Here he underwent a medical and two days of debriefing before being flown back to America.

U.S. Vice President Lyndon B. Johnson, who had arrived on Island to take John Glenn back to the USA, and Island officials welcomed Glenn after the normal flight debriefing. The event focused world-wide attention on Grand Turk for the first time and Islanders lucky enough to shake the astronaut's hand gleefully held up their own hands saying they had "touched space." 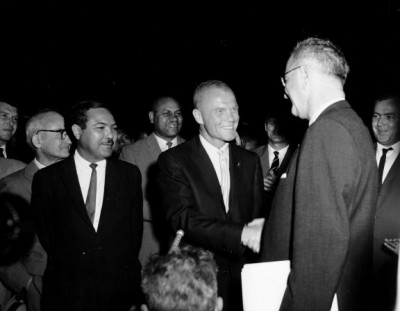 Grand Turk was chosen as it was the nearest Island with a USA base, this being the Missile Tracking Station. Thus the first landfall for the first American to orbit the earth was the Turks and Caicos Islands.

On May 24th, 1962 Scott Carpenter, in Aurora 7, became the second American to orbit the earth and on splash down he was picked up by the USS Intrepid. He was then transferred to the USA base on Grand Turk for his medical and debriefing.