Since the 1960s Grand Turk and Salt Cay have been known for some of the best scuba diving in the world.

But few people realize diving here started more than 150 years earlier in about 1854 when a Boston-based undersea treasure-hunting company used Grand Turk as their headquarters while exploring Silver Shoals for shipwrecks to salvage. Jeremiah Denis Murphy, a young Irish helmet diver, was among them.

1849-1851: Boston
Jeremiah emigrates from Ireland to the US. Joins inventor and entrepreneur James Whipple and learns the diving trade, still in its infancy.

He must have had a great deal of self-confidence, even at the tender age of 20, because when the rest of the group packed up and moved back to Boston, he and a colleague talked the company into lending them the necessary diving equipment so that they could stay behind and continue to locate and salvage shipwrecks.

Bear in mind that helmet, or “hard hat” diving, was at this time a newly emerging technology, barely 20 years old. The equipment was still evolving and looks primitive to modern eyes. Jeremiah’s mentor, James Whipple, was an innovator who is thought to have designed a diving bell as well as “armoured diving dress” (some sort of suit).

Helmet divers were the astronauts of their day, pushing the boundaries of the possible, risking life and limb, going where no one had gone before. However quaint-looking the equipment was, its principals remained largely unchanged for almost a century until SCUBA became popular in the 1960s.

1854: Venezuela
Jeremiah is involved in the salvage of the Spanish warship San Pedro Alcantara

Murphy’s diving career and adventures spanned almost the entire second half of the 1800s, and took him not just to nearby reefs and islands like Silver Shoals and the Bahamas.

In Jamaica he was the first person to dive on the sunken city of Port Royal, to Bermuda where he worked as a “submarine engineer,” and to St. Thomas where he and his brothers spent four years clearing the harbor of ships wrecked during the disastrous hurricane of 1867.

1862-65: Bermuda
Jeremiah destroys the prison hulk Thames with an electrically-detonated charge of 500 lbs of gunpowder.

It was there at nearby Salt Island that he raised gold bullion worth $60,000 from the wreck of the Royal Mail Steam Ship Rhone. But such success came at a steep price. Tragically, one—possibly both—of Jeremiah’s brothers died in diving accidents while working in St. Thomas. 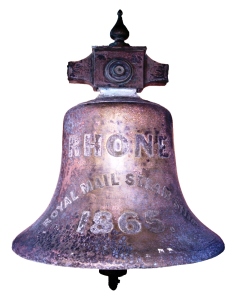 1873: Salt Islands, British Virgin Islands Jeremiah salvaged the bell from Rhone and brought it back to Grand Turk. It is in the bell tower in the Anglican church on South Caicos.

Jeremiah’s travels aside, this was his home. Although born in Ireland, Murphy became a true son of Grand Turk, living here until his death in 1895, during which time he was a deep sea diver, salt merchant, guano miner, US Vice Consul, Justice of the Peace, Freemason, and ex officio member of the Legislative Board. He married into the Manuel family with ties to Bermuda. He was buried with his wife, brother, two sons and a daughter in St. Thomas’s churchyard. His memorial reads In loving memory of Jeremiah Denis Murphy. Born at Courtmasherry, Co. Cork, Ireland March 21 1832. Died at Grand Turk Turks Islands, Sept 21, 1895.

To learn more about Jeremiah Murphy, see his dive locker with authentic hard hat diving dress, watch the video, and see the equipment he used, visit the Museum.