Following a vigorous selection process that saw the selection team start with 508 service records, later reduced to 110, the final 7 was selected from a further shortlist of 32 candidates.

On April 9th 1959 the “Mercury Seven” were introduced to the press. They consisted of Scott Carpenter, L. Gordon Cooper, Jr., John H. Glenn, Jr., Virgil I. “Gus” Grissom, Walter M. Schirra, Jr., Alan B. Shepard, Jr., and Donald K. “Deke” Slayton who was eventually grounded due to a heart condition. John Glenn was the most senior of the Astronauts, in age and date of rank. 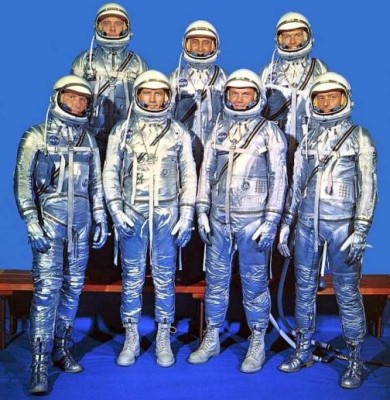 The seven selected Astronauts were soon a big hit, not only with the American public but also with the wider Western audience. The modern adventure, with its inherent risks, had caught the imagination and catapulted them into stardom, well before any had actually been launched into space. The bond that developed between the Mercury Astronauts was clear for all to see. They were involved in each other’s missions: during John Glenn’s flight his backup pilot was Scott Carpenter whilst Al Shepherd was in the Mercury Control Center, Cape Canaveral, Gus Grissom was the capsule communicator in Bermuda, Gordon Cooper was in Muchea (Australia) and Wally Schirra was at Point Arguello tracking station.

To speed up the project it was a requirement that easily accessible technology was used wherever possible. This included the adaptation of the Atlas Missile to carry the capsule into space. Whilst space flight became technologically possible, it was clear that there were still serious concerns about whether a human could survive in space. Monkeys and dogs had been launched into space, but it needed humans to test out the limitations of life in zero gravity. The Soviet Union and the USA were in a desperate race to get the first Man into space as well as the first Man to orbit the earth. To this aim there were three goals of the Mercury Missions.

Following Alan Shepherd’s flight in May 1961 there was the historic speech by President John F Kennedy, which challenged America to land a man on the moon by the end of the decade. Between 1961 and 1963 there were six manned space flights and the Mercury projects objectives were met, allowing for the real goal to be attempted: the landing of an astronaut on the moon.

Following the Mercury missions came Project Gemini in 1965 and 1966 that saw space walks, docking maneuvers and long flights. Of course we all know where this led – Project Apollo moon program and the resulting moonwalk by Neil Armstrong and Edwin Aldrin in 1969. In fact the Mercury Program can be seen as the launch pad for all human space flights.