The vast majority of the Turks & Caicos Islands territory is underwater and is a near pristine environment for coral.

Damage by boats, shipping, divers, and pollution has been minimal so far, and Islanders work hard to keep it that way. A lack of severe hurricanes in the past three decades has benefitted coral growth in the islands. The Museum’s coral reef exhibit showcases this underwater natural beauty. 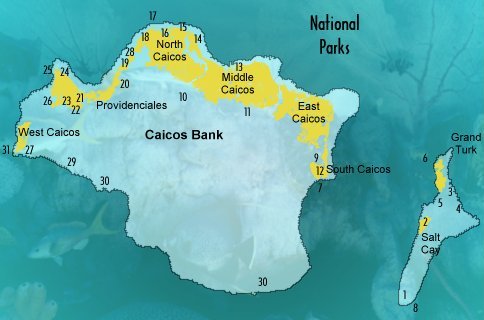 10 Wetlands on south side of Middle, North & East Caicos

The Turks and Caicos Islands are renowned for their excellent reef diving. There are several underwater National Parks where no fishing is allowed. This fishing ban allows portions of the reefs to remain undisturbed and to provide a safe home to thousands of fish species.

For divers, the parks are an experience difficult to duplicate elsewhere. Outside the parks, the reefs are exploited to a limited degree as fishing grounds for lobster and conch. They appeal mainly to sport divers who come to marvel at their unsullied beauty and dive the remains of unlucky ships.

The lack of safe harbors and the abundance of reefs and coral heads provided ideal ambush sites and hiding places for privateers and pirates. Numerous ships wrecked here over the centuries. Anxious to keep the English out of the region, the French twice tried to occupy the Turks Islands, claiming that they did so only to erect navigational aids.

Lighthouse on the North End of Grand Turk

Nevertheless, Islanders profited from the abundance of wrecks by salvaging the cargo, ships’ timbers, and iron fittings. They viewed wrecks as acts of a beneficent providence. Eventually the size and value of ships grew to the point that shipowners no longer viewed wrecks as the price of doing business. Faced with ships avoiding the islands, the British built a lighthouse on the northern tip of Grand Turk in 1852.