Through the years the Turks and Caicos National Arboretum has metamorphosed into many things.

After its establishment, native trees planted in the garden grew unexpectedly well into a cool, shady forest of green with winding paths and fragrant blossoms, where Museum events were held and people walked.

After hurricane Ike the garden was damaged and envasive plants started to take over.  With the help of the Wilmington Grant, the DECR’s plant biodiversity conservation nursery, and the Carnival Corporation/TCInvest /Government Infrastructure Fund, the National Arboretum iwas changed into the Turks and Caicos Botanical and Cultural Garden.

A proposal was made, and with the help of a local botanist, a scheme was set in motion in late 2010. The Garden is divided into habitats, not unlike what you would find throughout the Turks and Caicos Islands. Sand Dunes, Coastal Coppice, Cacti and Succulents, Scrubland, and the Dry Tropical Forest, which are more endangered than rainforests, and are one of the most ecologically fragile habitats on earth. 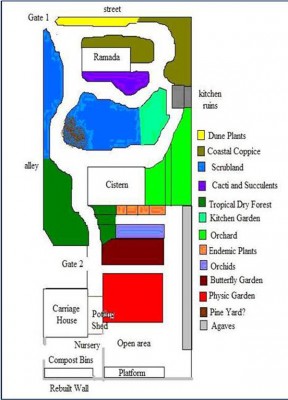 The Department of Environment and Coastal Resources (DECR), provided young indigenous plants from the nursery in North Caicos. The Turks and Caicos National Museum would like to thank the DECR for helping us promote this worthwhile project.  The DECR is managing a seed collection project with the Royal Botanic Garden Kew’s Millennium Seed Bank in England. Some of these plants were near extinction, and have been saved due to this project.

We use the Botanical Garden as an educational tool for schools and residents. The Botanical garden will also establish a nursery so the work of the plant biodiversity conservation programme will become a sustainable programme, ensuring the native plants continue to thrive in the Turks and Caicos Islands.

The Garden’s focus will be expanded to include many different native plants, including those with uses in the local “bush medicine” pharmacopeia. Well-grown mature trees will be pruned properly and labeled with identification markers, and facilities for caring for the garden will be upgraded. Strategic use of native plants will showcase their value in landscaping to encourage homeowners and businesses to choose landscaping schemes inclusive of TCI’s own botanical heritage. The Garden had a good start, and we hope to improve it into a true national treasure.

The garden suffered damage again after the 2017 hurricanes from both Irma and Maria.  Volunteers have assisted in keeping the garden groomed and planted new items to help revitalize the garden.