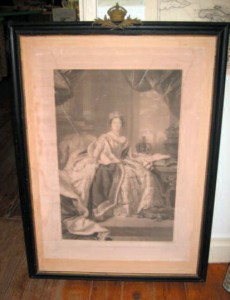 Queen Victoria waiting to be restored.

When I began working at the Museum the condition of the Queens’ portraits distressed me. It was sad to see these elegant ladies in such an inelegant state: the frames had worm damage, the matting was water-marked, and the portraits were deteriorating as they were not under glass. Finbar Dempsey remembers these portraits hanging in an administrator’s office and thinks they may have been damaged by one of the many hurricanes we have had over the 47 years he has lived on Grand Turk. Time to do some fixing up, I thought.

I contacted Ian Worth at Greensleeves Frame Shop in Provo for advice and an estimate for putting things right. After sending him a photo and measurements, he gave me a price for restoring the three Queens currently hanging in the museum: Victoria, Mary and the Queen Mum. All are coronation portraits. Then Melanie Clifton-Harvey, our visiting archivist, found Elizabeth hiding in the archival room of the science building. We were very happy to have the current queen to add to the group, and her portrait was in much better condition being the youngest and protected from the elements. 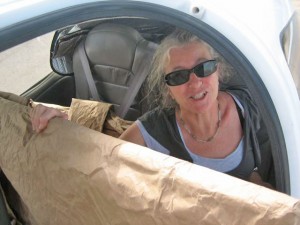 That's me trying to squeeze into the car with Queen Victoria

So now Pat Saxton and I set about finding sponsors to pay the piper. I spoke with my husband and we decided to sponsor Queen Victoria and dedicate it to his father, the great Italian actor Massimo Girotti. We thought he would be pleased to be remembered in this way on an island in the Caribbean. When I told Catherine and Mitchell of our plans, they immediately took the plunge and chose to sponsor Elizabeth, followed by Pat and Neil Saxton who came up with the funding for their favorite Queen!

The next hurdle was getting the portraits to Provo; Mitchell to the rescue again. He volunteered to fly the ladies first class in his plane if I went along for the final land delivery to Greensleeves. It was a tight squeeze as the portraits measure 42 x 30 inches. 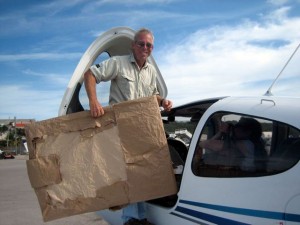 Mitchell volunteered to fly the Queens to Providenciales for restoration. They got first class treatment.

When I delivered two of the portraits to Ian at Greensleeves, I could see by the way his eyes lit up with the challenge that the Queens would be well cared for and lovingly restored. We should have the two ladies back sometime in February via the Mitchell Express. Hopefully we will soon have sponsorship for the last remaining Queen, and can then take Queen Mary and Queen Mum to have them restored together. Anyone interested? Contact me: Jackie Garbarino at (649) 247-2160 or email garbarino.jackie@gmail.com.

Your support of our wonderful museum is always very much appreciated.

Where is Simon, Sandy and Hurricane Mia Teach Publishing

A Busy Day at Guinep House