Last night we visited Pine Cay home owners Jack McWilliams and his wife, Mary. They had some things they wanted us to see. Jack and I go way back. He is the one who took me to see Ft. George Cay for the first time at least 10 years ago. Jack spent a lot of time over the last couple of decades exploring the ruins and keeping a sharp eye out for artifacts that occasionally turn up on the beach or in the bush, half covered in leaves. These objects made him and other people on Pine Cay curious about the history of Ft. George. They began to make inquiries and look for old records that might reveal who built the fort and when it was occupied. Over the years this small group of friends collected artifacts and compiled a lot of important information that goes a long way toward answering these questions. 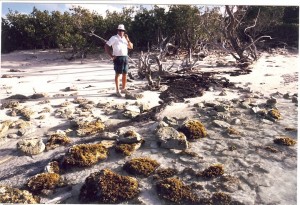 Fortunately for us, they even made carefully measured maps of the ruins on the island. These maps reveal that over the last 10 years at least 50 feet of the northwestern shore of Ft. George, where a large part of the fort was sited originally, has eroded away into the sea, taking with it most of the largest structure. Extrapolating that rate of erosion back 200 years, one can easily imagine that the cannons, now lying in chest-deep water 150 feet off shore, were once on solid land.

Jack came with us over to Ft. George a few days ago. His familiarity with the island was so intimate we started calling him “GPS McWilliams.” He was amazed at how much of what we call “Structure A” has disappeared since the last time he visited the island a few years ago. Pushing back into the bush we showed him two other structures that he had heard about, but never visited in person. In turn, he showed us things we had not noticed, including an area he called “the dump” where he found all sorts of artifacts jumbled together in a shallow pit. 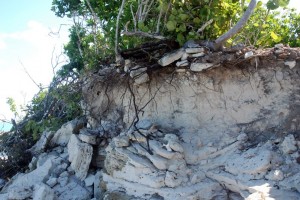 This was the reason we visited him at his home last night. Although we have found an abundance of lead and iron shot, musket parts, iron fasteners, shards of ceramic and glass vessels and the like, the objects Jack found at “the dump” were different and more varied. One of his most remarkable finds was a fragmentary bone knife handle with the letter “M” clearly inscribed on it. He also found bone buttons and the stock from which the buttons were being cut.