Coins found on these Islands are from different time periods and different currencies. The museum has coins from the Unites States, Great Britain, Spain, Jamaica, Haiti, Bermuda, and the Danish West Indies. Many of these have at one time or another been legal tender in the Turks and Caicos Islands.

The oldest coin found in these Islands is a copper Carlos y Juana 4-maravedi minted in Santo Domingo dating between 1542 and 1558. Mike Spillar, a local diver, found the coin in a shallow pool of water on deserted West Caicos in the early 1980s. At the time, he did not realize what the small piece of metal was, but thought it might be important and turned in over to archaeologists. More can be found out about this coin in the section on Maravedi Cove.

In lieu of money, sisal plantations and salt companies issued tokens. Token use was common in the Caicos Island from the mid- nineteenth to the early twentieth centuries. The earliest user of tokens was John N. Reynolds in 1865.  These coins, or tokens, represented wages that workers had earned on the sisal farms or in the salt ponds. Workers redeemed tokens at the company stores for food, hardware, and clothing. This system was not favored by many as it gave a reliance on the company story – you could only spend your wages in one particular shop. To read more about the use of tokens in the islands, download “They Made Their Own Money” from the Astrolabe newsletter, Summer 1999. 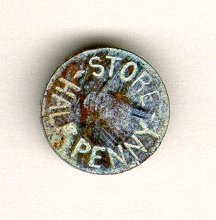 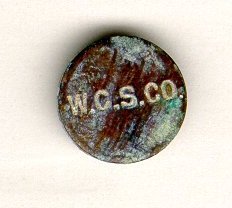 There was also the “truck” system. This allowed a worker to build up credit in a company store. This worked well in times of hardship, such as a bad year with a bad salt harvest, but again it left the worker in debt to their employer and quite often in the end they were just trying to clear their debts, which became increasingly more difficult to do.

Souvenir coins are also issued. These often depict the monarchs head on one side and are issued to commemorate special events, such as the 500th anniversary of the rediscovery of the New World by Christopher Columbus and more recently for Queen Elizabeth II’s Golden Jubilee in 2002. 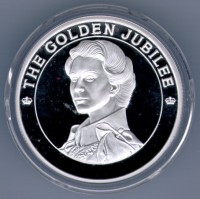 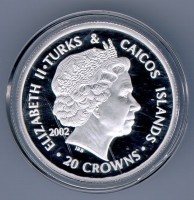